"Does your wife show you her love?” In a study of 10,000 married men, this question turned out to be revelatory. Among men with high levels of anxiety, a whopping 93 percent that answered “No” developed angina-related chest pains within five years—nearly twice the rate of those answering “Yes.”

This 1976 Israeli study was one of the first to clearly document how emotions affect the physical heart. Today, the research is so vast and compelling that last year, the American Heart Association issued a statement urging that psychological factors be taken into account in cardiovascular care—which may result in doctors asking patients about depression and anxiety as well as testing for blood pressure and cholesterol levels.

“What’s on your mind really does affect your heart,” says leading researcher and cardiologist Michael Miller, M.D., author of Heal Your Heart and director of the Center for Preventive Cardiology at the University of Maryland Medical System. “Our hearts require emotional health in order to maintain cardiovascular health.”

Two emerging fields are probing the mind-heart connection: neurocardiology, which studies their neurological interplay; and behavioral cardiology, which examines how psychological and social factors lead to heart disease. Increasingly, researchers are documenting that the brain and the heart form an intricate feedback loop that works neurologically, biochemically and electromagnetically to optimize well-being. What hurts one—be it artery-clogging foods or angry outbursts—can hurt the other. What heals one—be it exercising or a good belly laugh—can heal the other. There’s good news in that, says Miller: “You can heal your heart by actively engaging in positive emotions each and every day.”

In Western medicine, the heart has been downplayed historically as a pump mechanistically taking orders from a bossy brain, but recently, the heart’s role is being reexamined: With 40,000 neurons, it sends more signals to the brain than it receives. As integrative cardiologist Mimi Guarneri, author of The Heart Speaks, puts it, “The heart is a multilayered, complex organ, possessing intelligence, memory and decision-making abilities independent from the mind.”

The electromagnetic field it generates is about 100 times stronger than the brain’s magnetic range and can be detected up to three feet away from the body, report researchers at the pioneering HeartMath Institute, in Boulder Creek, California. They found that one person’s brain waves can synchronize to another person’s heart and two hearts can synchronize to each other, which may help explain why people are drawn to or repelled by each other. When the heart’s rhythm pattern becomes erratic and disordered during stress and negative emotions, they report, the neural signals traveling to the brain’s emotional centers also get disrupted, hindering clear thinking and reasoning—which may help explain why we make dubious decisions under stress.

The High Toll of Tough Emotions

Although scientists debate whether emotions start in the brain, heart or from physical sensations elsewhere in the body, it’s clear through magnetic imaging technology that it’s the brain’s task to process and regulate emotions via the flow of neurotransmitters through the amygdala, hypothalamus, hippocampus, prefrontal cortex and other brain regions. Emotions like anger, fear, grief and anxiety set off a cascade of reactions involving the hormone cortisol and proteins called cytokines, creating an inflammatory response that, if it becomes chronic, can promote the accumulation of plaque in the arteries that can become unstable and rupture, triggering blood clots that lead to strokes and heart attacks.

Surveying 25,000 participants in 52 countries, the landmark INTERHEART Study in 2004 concluded that about 30 percent of heart attacks and strokes are due to psychological factors, and ongoing research supports this finding.

Depression. Adults that are depressed are twice as likely to develop heart disease. In one study, moderate to severe depression quadrupled the death rate in heart failure patients.

Anxiety. Researchers have linked chronic anxiety with a 48 percent increased risk of cardiac-related death over 11 years. It has also been shown to be a risk factor for angina, heart attacks and ventricular arrhythmia.

Shock. A sudden emotional or physical shock, like a death in the family or an earthquake, can trigger stress cardiomyopathy, known as broken heart syndrome, which resembles a heart attack.

Anger. An episode of intense fury—described as “body tense, clenching fists or teeth, ready to burst”—increases by 8.5 times the risk of a heart attack within the next two hours.

Loneliness. Being socially isolated and lonely is linked to a higher risk for cardiovascular death than hypertension and obesity—alarming information since more than 60 percent of Americans report feeling lonely, left out, poorly understood and lacking companionship, according to a 2020 survey.

Boosting Both Brain and Heart 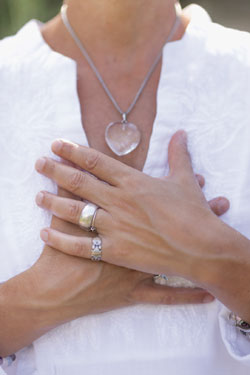 wayhome studio/AdobeStock.com“There’s no damage caused by negative emotions that positive emotions can’t heal,” says Miller. A large body of research has shown that cardiovascular disease risk can be reduced by up to half with optimism, a sense of humor, forgiveness, social support, religious faith, vitality, gratitude, altruistic behavior, emotional flexibility and coping flexibility. People that are optimistic are less likely to be rehospitalized or die from heart disease, Finnish researchers report.

“For optimal health, maximize the health of both brain and heart. For example, if you eat well and exercise, but are still stressed out, your heart will suffer. Conversely, if you are not stressed out, but overeat and do not exercise, your brain will suffer,” says Miller. Some heart-and-mind-healthy strategies include:

Doing the Basics. Exercising a half-hour daily and eating a largely plant-based, Mediterranean-type diet that’s low in saturated fats has been found in numerous studies to lower the risk of both cardiovascular disease and cognitive decline. Working with health practitioners to get blood pressure, blood sugar and inflammation levels under control, perhaps using supplements or medications, is also a key preventive step.

Giving and Getting Hugs. Oxytocin, the “love hormone” released from the pituitary gland during touching and hugging, lowers blood pressure and heart rate, and regenerates new heart tissue in animal studies. Proactively reaching out to family, friends, neighbors and co-workers can nurture affectionate ties, but if a human isn’t nearby, even hugging a teddy bear has been shown to release oxytocin—which may explain why 40 percent of U.S. adults sleep with stuffed animals. Owning a dog, but not necessarily a cat, makes us more likely to survive a heart attack, report researchers.

Mindfully Letting Go. As studies with police officers, healthcare workers and firefighters have demonstrated, mindfulness training effectively lowers anxiety and depression, even for those in life-threatening situations. “To be present, ever acutely aware of our thoughts, emotions, feelings and how we are choosing to react is critical,” says cardiologist Cynthia Thaik, author of Your Vibrant Heart and the founder of the Holistic Heart Healing Center, in Los Angeles. “Once we are aware of our reaction, the ability to let go—of judgment, doubt, anger, resentment, fear, all our negative thoughts, emotions and feelings—is crucial to our healing process.”

Laughing a Lot. Many of us have a chuckle deficit in our lives: The average 5-year-old laughs up to 300 times a day, the average adult only four. To lower the risk of heart attack and stroke, find ways to laugh long and hard—such as watching hilarious films or videos on YouTube or TikTok. Physiologically, the endorphins released by a hearty belly laugh bind to receptors that release nitric oxide, relaxing blood vessels.

Breathwork. To bring the mind and heart into a healthy, coherent rhythmic pattern, the HeartMath Institute suggests heart-focused breathing, which involves imagining that we are breathing in through the heart as we inhale in a smooth, comfortable manner to the count of five or six, then breathing out for five or six counts while visualizing that the breath is flowing out of the heart.

Meditation. People that practice meditation are significantly less likely to have a heart attack or stroke, perhaps because it has been shown to lower heart rate, blood pressure, breathing rate, oxygen consumption and cortisol levels. Alzheimer’s expert Dharma Singh Khalsa, author of Meditation as Medicine, advocates kirtan kriya, a 12-minute, daily meditation that includes chanting, finger movements and visualization. Research has demonstrated that it slows cognitive decline, eases depression and increases anti-aging telomerase activity at a cellular level by 43 percent in eight weeks.

Yoga or Tai Chi. In studies, yoga has been shown to lower inflammation and metabolic syndrome markers linked to heart disease and reduce atrial fibrillation episodes. The slow, graceful movements of tai chi reportedly lower blood pressure and strengthen the hearts of people with heart failure.

Music. Whether it involves listening, playing an instrument or singing, music has been shown to lower heart rate, reduce inflammation, enable longer exercise periods, ease anxiety after heart surgery and heart attacks, and help stroke victims regain the ability to speak. Choose music of whatever genre inspires joy and sing along for extra benefit, advises Miller. “If your partner is flummoxed by your enthusiasm for yodeling or your neighbor doesn’t exactly approve of your attempts at arias, kindly inform him or her it’s doctor’s orders,” he jokes in Heal Your Heart.

Health writer Ronica O’Hara can be contacted at This email address is being protected from spambots. You need JavaScript enabled to view it..

Read 1077 times
Tagged under
back to top